Richard Boughton, High Sheriff of Warwickshire and Leicestershire, was killed on 20 August 1485 whilst out recruiting troops for Richard's forthcoming battle against Henry Tudor. Word has it that he was set upon by a group of Henry Tudor's men out on reconnaissance in the same area. So Boughton never made the battle but was instead taken and buried in the church his family had founded, St Botolph's, Newbold-on-Avon, a village just outside Rugby near his manor of Brownsover acquired in 1471. The church was begun in 1452, the year of his King's birth and is a beautiful small example of the late Perpendicular with wide airy windows.

Richard Boughton, who was born about 1450, was the son of Sir Thomas Boughton of Kempston Hardwick, Bedfordshire and his wife Eleanor Allesley, daughter of Sir Geoffrey Allesley (pronounced Orsley) and Eleanor Sutton. It was Eleanor who brought the Warwickshire lands to the Boughtons. Richard married Agnes Longueville, from Wolverton Leicestershire, whose mother was Margaret Catesby, the aunt of William Catesby executed after Bosworth. Hence William Catesby and Richard Boughton appear in a number of deeds together. 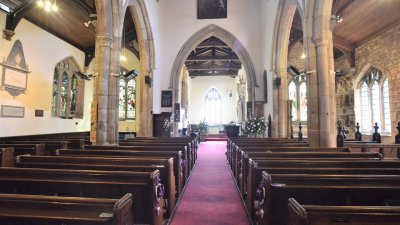 The heavy oak door through which Richard Boughton's coffin was carried was installed when the church was built and is still there to this day in the projecting porch. Because it served two parishes St Botolph has two entrance doors - one on each side. Members of each parish used a separate door. 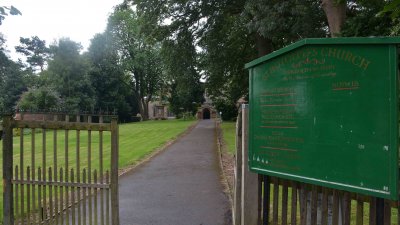 (the pathway to the church leading to the great entry door) 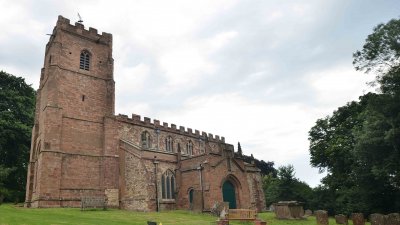 (the other entrance door on the south side of the church)

The Boughtons went on to become baronets and through marriages in the eighteenth and nineteenth centuries to become the Ward-Boughton-Leighs. The Leighs owned Stoneleigh Abbey near Kenilworth.